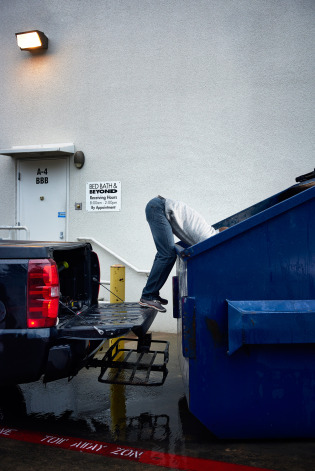 The prevailing law comes from a 1988 Supreme Court ruling in California v. Green-wood, which held that when a person throws something out in a public space, they have no reasonable expectation of privacy. In other words: Most of that stuff is fair game. Trespassing, however, is a different story. If you dig into a dumpster on private property—one that’s up against the side of a building, within a fenced enclosure, or marked “No Trespassing,” for example—you could get ticketed or even arrested. In Matt Malone’s experience this is uncommon: “I’ve never even had a cop ask me for ID.” Most police couldn’t care less about dumpster diving, Malone says, “though I have encountered a couple of cops who did care about what I was finding. I usually give them something, and it makes them really happy.” A few municipalities have passed ordinances against dumpster diving that have not yet been tested in federal court. Malone encourages divers to follow what he calls the Move Along Rule: If a store employee, security guard, or police officer tells you to “move along,” you should—without arguing or trying to explain the law to them. —R.S.