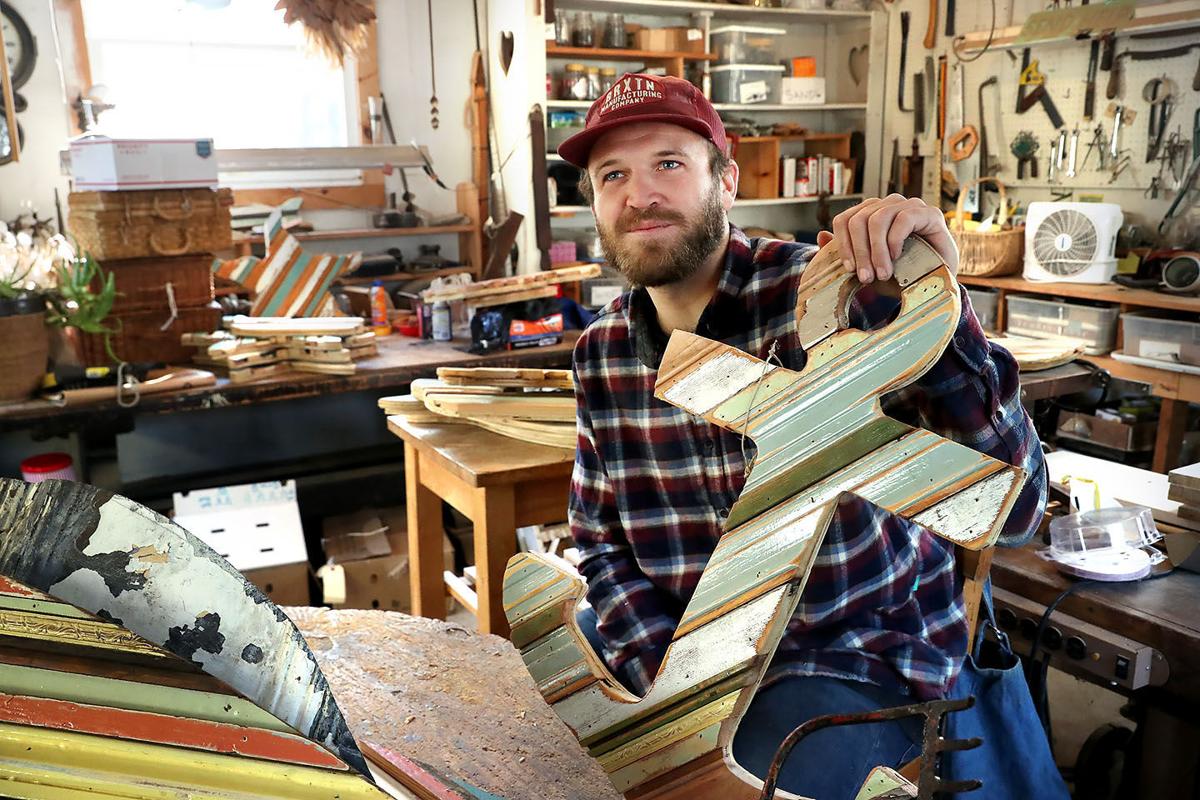 CAPE MAY — Some people just don’t understand the lengths, and depths, Peter Henderer goes to for art.

One day, as he was dumpster diving in Cape May Point for scrap wood from a home-remodeling project, he caught the attention of a woman and her dog, which began to bark at the trash bin.

“I’m pretty sure she called the cops and I got a little freaked out,” said Henderer, 27, of Cape May.

This was an average week for Henderer: an artist who dumpster dives to salvage recycled wood from Cape May homes for his projects.

Henderer checks recently remodeled homes, county dumpsters and large dumps to find the perfect canvases for his art, which ranges from ocean-themed pieces such as starfish and mermaids to outlines of the state of New Jersey.

For some pieces, he’ll use shovels for fish bills, rakes for fins and light bulbs for eyes. All of the work is done in a shed in the backyard of his grandparents’ Cape May home, where Henderer will cut, sand and stain plywood before coating it with polyurethane to withstand any climate.

Henderer said he has attended about 25 craft shows this year and has moved more than 200 pieces for the year.

It’s all still relatively new for Henderer, who only started making wood art a career in 2015.

“It’s pretty rad to make a living off of stuff that I make. That always trips me out,” he said.

Henderer said he comes from a background in art: his mother was an artist, his father an architect and his grandfather an industrial designer. He said he can’t thank his parents enough for their support and his grandparents for letting him transform their shed into an artist’s studio.

As a kid, he said his family knew this was the direction he’d want to take.

“Some parents tell their kids to get a job, but my parents knew I was going to do my own thing,” he said.

After high school, Henderer attended Savannah College of Art and Design in Georgia. Upon graduating, he tried his hand in the restaurant business before screen-printing T-shirts at Flying Fish Studio in West Cape May.

After that, he took his talents to Puerto Rico to work in a similar profession. He still travels there in the winter, so he has a busy couple of weeks finishing up his latest pieces.

Henderer said he can usually finish 30 pieces each week, and most of his business comes via email from potential buyers asking for a custom piece.

He’s also made specific pieces for events in Cape May County. He created lima bean wood art for the West Cape May Lima Bean Festival this fall. Most recently, he sculpted Christmas tree pieces for the Cape May Mid-Atlantic Center for the Arts and Humanities Christmas Tree farm.

For Henderer, it’s a full-time job, as he spends about 40 hours a week in his shed-turned-studio. But he admits he would cut his work days short in warmer weather if the surf was nice.

He plans to head to Costa Rica to surf and travel at the beginning of the New Year.

After that, he plans to get dialed in with his online store and make it more accessible for people to order art. He’s traveled to New York for previous craft shows, but says he may travel South to show off his work. He also has the possibility of working with larger partners to feature his art.

It’s all exciting, Henderer said, but he still wants to take it slow and not lose the small-business vibe he’s created.

“I guess my idea is to expand, but slowly,” he said.