Professor Dumpster (you may know him by his given name Dr. Jeff Wilson) 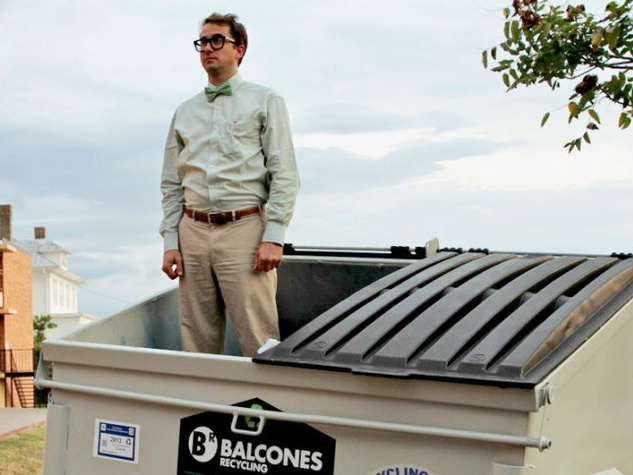 Do you think you could live in 33 square feet? What about a 33 square foot dumpster? Well, one Huston-Tillotson University professor is about to do just that. Professor Dumpster (you may know him by his given name Dr. Jeff Wilson), is a Harvard and University of Canterbury-educated environmental science professor who has decided to live in a dumpster for a whole calendar year.

Beginning this fall, Professor Dumpster will take up residence in the customized trash bin in order to spread awareness about sustainability and promote the model of “less is more.” After posting on Facebook that he was selling everything he owned for a single dollar (we wish we had seen that status update), Wilson moved into his office at HT to begin the process of lessening his environmental impact and living on a smaller scale.

But this isn’t just a story about living in a dumpster. Professor Dumpster is after all a teacher, and this year-long experiment is a chance for his students to design, build and test the bin with the goal of taking it from a garbage can to a home.  “The idea here is to ultimately show one can have a pretty good life in a dumpster,” Wilson told Fast Company.

The first phase of the project is to outfit the tiny space to have many of the creature comforts of a modern home: shower, kitchen, bed, WiFi and toilet. After that, the goal is to design the space to be as energy efficient as possible in order to reduce its environmental impact (think things like solar panels and energy producing toilets).

For times when the professor just needs to get out of the trash can, students can opt to stay overnight in the dumpster. As one HT student told KVUE, she’s already excited to spend a night in the bin. “I think it’s pretty intriguing,” said Evette Jackson. “It’s pretty cool. I want to live in it too.”

After his year of living in 6 feet by 6 feet is up, Wilson plans on taking the bin across the country to teach students about the possibility of living outside the box while living, well, inside a box.

You can follow Professor Dumpsters latest adventures on The Dumpster Project blog.