Dumpster Diving could save the World 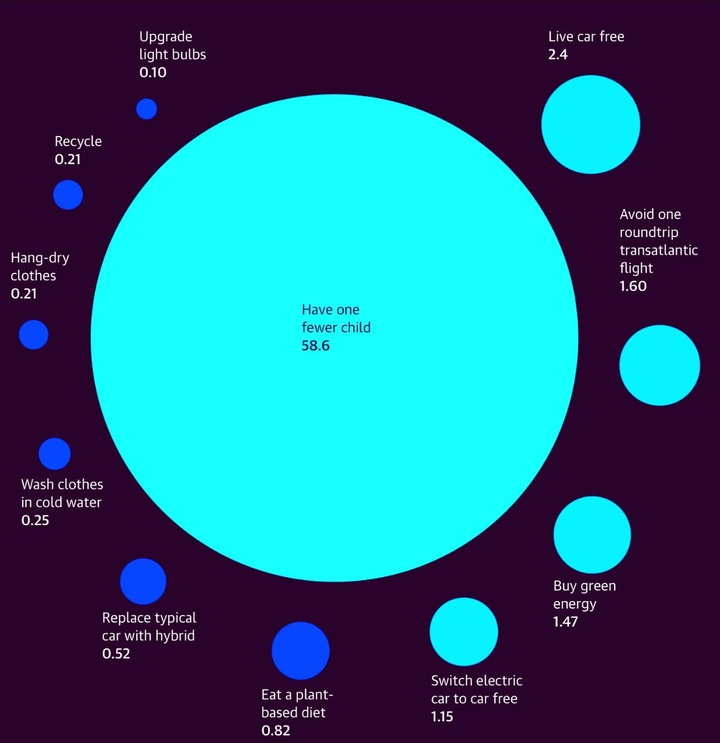 Their figures vindicate what I (along with many environmentalists) have thought but have been loathe to say, that the biggest effect any of us can have on the planet is rated by the number of progeny we leave. I read a lot about humans’ influence on the world (mostly bad) and what we can do to mitigate it — you know the litany by now: don’t fly, don’t drive (or at least go electric), recycle, air-dry clothes, go vegetarian — but somehow the obvious is never mentioned. Or if it is, it’s in the generalized, remote context of those Indians and Chinese and Bangladeshis who are overpopulating their countries. The idea of us, as in the US, having fewer kids gets a pass. (Even though it takes 40 Bangladeshis to use as much energy, food and water as a single American.)

Turns out, the elephant Louisa referred to above is even bigger than most of us imagined. The figures are sobering: in round numbers, each child you and I bring into the world results in putting nearly 60 tons of additional carbon dioxide into the atmosphere for each year of the parent’s life. (Each parent gets to be responsible for 50 percent of the child’s emissions, 25 percent of each grandkid’s emissions, etc.)

Meanwhile, giving up driving a car for a year reduces CO2 emissions by a paltry 2.4 tons, while avoiding a round-trip trans-Atlantic flight (squirm) saves 1.6 tons. As for the rest, it all looks pretty minimal: avoiding meat consumption saves about 0.8 tons annually, washing in cold water and air-drying clothes are each worth about 0.2 tons, the same as recycling. Sigh. Recycling’s good. Having one less kid is 300 times good.

The paper also addressed how often the notion “having fewer children helps the world” is mentioned in textbooks and government documents on climate change: zero. Not one word in all the books they checked.

Of course. It’s hard enough to discuss evolution in schools these days, let alone the possibility of telling young people about the one really effective method they could take to take care of the planet.