The Art & Science of Dumpster Diving 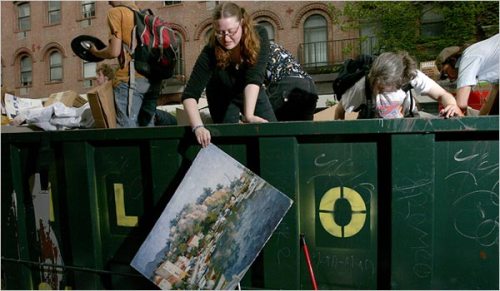 If you aren’t familiar with this little soft- cover gem, perhaps it’s time you made its acquaintance. Despite the media’s sunshine-pumping over our “improving economy,” jobless figures are either stagnant or rising all over the country. Most of the improvement seems to be among investors and banks.

With every day that passes it becomes more clear we ARE in a recession, have been for years, and media smoke about a “recovery” is plain twaddle.  Further, we’ve got 12 more months of the Barrack Obama presidency to suffer through, that is, if we last that long.  Statistics are tricky little boogers:  Alabama’s unemployment figure will bounce between 9 and 10 percent. But Wilcox County, Alabama, registers 26 percent jobless — that’s the same figure for the whole U.S. in 1932, the Great Depression. It’s plain some areas of this country are suffering far worse than statistics and the media allow.

Newspapers voiced a chorus of feeble cheers recently when the government reported a drop in unemployment from 10 percent to 9.7 percent. But its figures are based on ex-workers who apply for jobless payments. Not counted here are graduating students who can’t find work; or employees of small businesses in many states who aren’t eligible for those payments; or harassed breadwinners working two jobs who lost one of them. Adding another touch of woe to this portrait is rising gasoline prices, which will ensure job-hunters will pay more for their searches.

Hoffman has written what appears to be a handy manual on how to attain a recession-proof, comfortable life by raiding trash dumpsters. But his book is more than that. In places it evolves into a philosophy of independence, self-sufficiency, survival techniques, and good, old American know-how.  It’s the sort of work Ben Franklin might have endorsed and every pioneer founding father could have heartily cheered.

Hoffman came by the skill of dumpster diving naturally. He acquired it from his father, a master technician of the art. Although the Hoffman brood was large — and regular income consisted of social security and a veteran’s disability check — they lived in a sort of rural affluence. Not so their neighbors. He describes their children:

“They were always late for the bus. They’d come dashing out of their poorly painted, rundown houses when the bus driver leaned on the horn. Their clothes were unwashed, tattered and familiar — the same sort of clothes they wore all week. Their lunch — if they had one — was hardly enough to satisfy a small dog. These kids were gaunt. They smelled bad …. Needless to say, these kids did poorly in school.”

But at the Hoffman household:

“F-O-O-D. My god, did we have food. We had two huge freezers stuffed with frozen yummies. We had a root cellar stuffed to bursting with canned goods and produce. We had cupboards and closets and a fridge stuffed with chow….We had emergency stashes of goods in the attic, the barn, and carefully buried in the yard, “just in case.”

“Ah, memories. We had birthday parties that were the envy of the whole neighborhood. Each of the Hoffman kids had a bike, and frequently we had several bikes until we made trades. We had a respectable stash of firearms and ammunition. We had more good, decent clothes than we could wear….”

And all this was in addition to a library room with thousands of books and hundreds of record albums. Most of it came from raiding area dumpsters. Since their visible income made them available for food stamps, the Hoffmans snapped those up greedily under a family policy of “grab everything that’s offered.”

Americans, the author estimates, discard an average of two tons of trash every year. Most of it is packing and wrapping stuff. But the remainder is valuable enough to finance a modestly affluent life for man, wife, and kids.

“Everything produced by our society,” he writes, “is eventually discarded by that same super wasteful society. To think that in the 1930s and 1940s we were boiling bones twice to make soup. Today, within the lifetime of that same generation, we are discarding valuable property as though every household had its own magic lantern.”

In short, enough hot stuff to turn a poor dumpster diver into a municipal power broker.

Hoffman goes thoroughly into the technicalities of diving for wealth: what to wear, what to carry, how to avoid competition from bag ladies and trouble with the police. The science of scouting out the most fruitful trash bins takes many pages.  Evaluated also are best areas of the nation for diving — comparisons, say, of mid-sized Minnesota cities versus their sisters on the Mexican border.